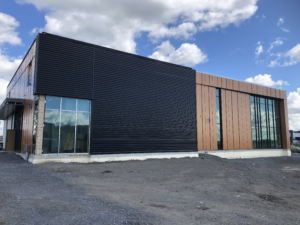 Formerly known as Technoparc, the Parc d’entreprises de la Pointe-Saint-Charles (PEPSC) is located between the Champlain and Victoria bridges in Montréal and host an industrial technology park. The site is made up of fill material directly on the river bed up to 16 meters thick. Used as a landfill between 1866 and 1966, it contains contaminated soil and waste of all kinds. In the 1990, seeping of hydrocarbons into the St-Lawrence River was observed upstream of the Victoria Bridge and the toxicity of the groundwater was confirmed in 2007.

The temporary solutions put in place over the years became insufficient and sustainable
containment measures were required. The City chose a permanent solution. The construction of a 1.9 km long cement-bentonite slurry wall anchored to the rock, as well as a groundwater collector system and a treatment facility that will put an end to the migration of contaminated groundwater (NH3 and PAH) and of hydrocarbons with polychlorinated biphenyls (PCBs) towards the St. Lawrence River. The construction of a LEED plant using the best available technologies for the treatment of the groundwater will allow targeting the appropriate treatment for each sector
of the PEPSC.

The entire treatment process was designed to limit the use of raw materials and generation of residues. Bringing 18 groundwater collectors to the treatment facility rather than just one allow treating only those containing contaminated groundwater. The process used to treat the groundwater contaminated with ammoniacal nitrogen is innovative in that it involves precipitation of struvite salt which is easy to adapt to water quality conditions and whose residue has the potential to be use has a fertilizer. The PAH and PCB are removed by adsorption on granular activated carbon (GAC) filters.

Remediation is a first step in the integration of this site into the urban matrix. In the coming years, a linear park along the river will be developed and the use of the currently vacant land is the subject of many discussions.

Over all, more than 300 people have contributed to the design and construction of this project. Among those most involved were the City&#39;s Environment Department engineers, Claire Merckaert, Marion Arrizabalaga and Josée Samson, and field technician Constanza Lara-Olguin; the Property Management and Planning Department, namely Jonathan Bezeau, Dhouha Bouraoui and Sylvain Durand. Also, the presence at all times of the engineering consulting firm SNC-Lavalin, was a major factor in the success of the project, especially Project Director engineer Abdel-Majid Benabess.