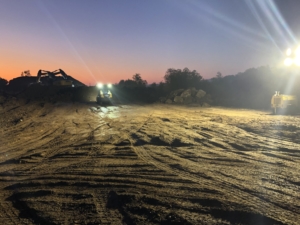 The West Niagara Secondary School and Ridgeview Garden Centre brownfield site straddles the Grimsby/Beamsville boundary line. While it sits within a Greenbelt, it is directly adjacent to the Grimsby Settlement Area, surrounded by multiuse commercial, residential, and institutional properties. The property had been used as a shale quarry and coal and wood-fired kiln brickworks factory (The Grimsby Brick and Tile Works and the Beamsville Brickworks). Following the cessation of shale extraction and brick manufacturing, the property has been home to the Ridgeview Garden Centre, a locally-owned gardence centre and produce market. The abandoned quarry and original pond/wetland areas were infilled with imported fill and shredded construction and demolition waste from Harbourfront Recycling (HFR). The placement of the HFR waste has been subject to an MECP order since the 1990s. In 2019, the District School Board of Niagara (DSBN) purchased the western half of the property to develop and build the new West Niagara Secondary School. The garden centre will be relocated to the eastern half of the property. To facilitate the redevelopment, the HFR waste was removed to a licensed landfill, and the impacted soil (brickworks and other quarry fill) was extracted from the new school building footprint. It will be sequestered and managed on the now-divided properties.

A strong partnership between the DSBN, the garden centre, the MECP, the remediation contractor and WSP was forged to maintain project schedule and achieve a positive outcome, all the while keeping the garden centre in operation. Making the sites suitable for the new West Niagara Secondary School and the revitalized Ridgeview Garden Centre was a true team effort from WSP; in all, thirty-seven different WSP staff were involved in the project—key among them were Karen Bailey, Amy Chiang, Grace Coveney, Kevin Fitzpatrick, Anya Krywy-Janzen, Sean Morris, Najla Nureddin, Justin Serroul, Bailey Walters, Rebecca Warrack, and Freesia Waxman.